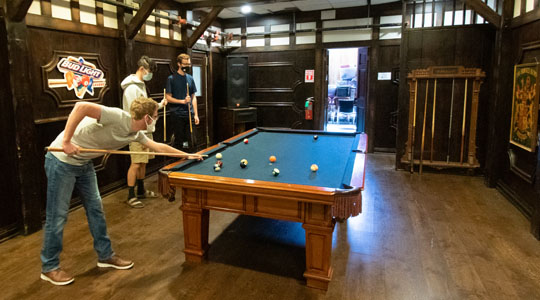 How the Pub Came to Be

Through the academic year of 1971-72, Charlie Finegan (then Plant Superintendent) and his crew were busy building a new student pub in the basement of Stevenson Taylor Hall. With the completion of the new J. J. Henry Auditorium in the spring of 1971, the lecture hall located in the area that had formerly been a bowling alley was no longer necessary. As soon as it had become apparent that this area would be available, Admiral Brockett, responding to requests he had received from several students, had plans drawn up for the installation of an English-style student pub in the space.

Originally the pub was planned as a Parents’ Fund project. A watercolor rendering was prepared and displayed during Parents’ Day and Alumni Homecoming. It was at the Alumni Homecoming that Mr. Leslie Durant ’39 saw the rendering. He and his wife suggested that they would like to help with making the pub a reality. Not having heard anything, Admiral Brockett called Mr. Durant who in turn told him, “We’ve got them started at the joinery in England, send them some dimensions.” Brockett was delighted, however, when Leslie Durant looked at the plans and offered on the spot to pay the full cost, which meant that construction would start immediately. Mr. Durant agreed to the donation with one condition – that the name would remain the same: The Brocket Arms Pub. Admiral Brockett, a man with a sense of humor agreed.

Les Durant modeled our Pub after the Brocket Arms Pub in the UK. The British firm supplied all the lumber already cut to size and ready to assemble. The entire pre-fab pub arrived in the fall of 1971, all in a single forty-foot box weighing several tons. The box was unloaded and work began. By the end of the spring 1972 semester, the pub was nearly finished, though it was not ready for operation until the following fall.

Mr. Durant had furniture sent from Peru, and the old Webb pool table was rebuilt. When it was decided that the furniture was not appropriate for the English pub setting, Mr. Durant sent a check for new furniture. The old furniture found its way into the upper classrooms. Also sent were various befitting antique decorations. But something was still missing in the eyes of the students. Ah yes, a sound system! Mr. Durant once again came through with a substantial donation earmarked for The Brocket Arms Pub sound system.

During the winter of 2021, Kirk Lehman P’22 spearheaded a renovation of the pub, recognizing how special this space is for the Webb family, especially for current students. In addition to his generous cash gift, Mr. Lehman gifted new oak flooring, moldings, and his time and energy spent staining the moldings, arranging for the purchase and installation of a new pool table. To help underwrite the cost of the renovations, Webb trustees, alumni, and past parents joined Mr. Lehman by making generous contributions to complete the project. We want to give special thanks to Richard Celotto ’73, Nolan Conway ’15, Hampton Dixon ’11, Katherine Dixon P’11, Jay Edgar ’87, John Hootman ’01, Andrew Ko ’16, Jon LaBerge ’76, John Malone ’71, Mark Martecchini ’79, Keith Michel ’73, Gene Miller ’96, and Wombi Rose ’09 for their generosity!