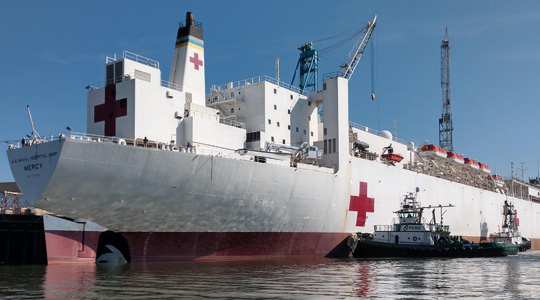 The past year has brought more surprises than any of us could imagine. For many of us, work transitioned to something done from the comfort of our living rooms, rather than in our offices. But for some of us, call us the lucky few if you’d like, our work can’t always be done from home.

This is particularly true when that work includes visiting a ship. In February of this year, a team from Bruce S. Rosenblatt & Associates, LLC (BSR) performed a Deadweight Survey and Inclining Experiment of the hospital ship USNS Mercy. The Mercy is one of two hospital ships owned by the U.S. Government. Many of you probably saw news stories about the Mercy’s trip to Los Angeles to serve as a hospital during the early days of the pandemic. Considering the audience of this article, I suspect that many of you know what I mean when I say “Deadweight Survey and Inclining,” but I’ll give a brief overview just to be safe. The term “deadweight survey” describes the process of inspecting every space aboard a ship, and cataloging the contents – the weight and location of each item – of that space. This, as you might imagine, is rather time-consuming. Then there’s the inclining, which involves moving a series of very heavy weights back and forth across the ship to measure the ship’s stability. Combined, we call these two events a Stability Test.

For any ship, a stability test requires a lot of effort. But for a ship the size of the Mercy, “a lot” doesn’t even begin to cover it. The Mercy can carry more than 2,200 people at full capacity, and at 894 feet, is one of the largest ships the U.S. government owns. So, as you might imagine, BSR needed a little help to pull off such a massive undertaking. Fortunately for us, the timing of the stability test coincided with the Winter Work Term at Webb. Of course, BSR and Webb are certainly not strangers. At the moment, BSR has eight recent graduates on its staff: Andy Thompson ’15, T.J. Brackin ’16, Blake Loncharich ’18, L.J. Bock ’20, Mary McGuinness ’20, Rocky Regan ’20, Harrison Tack ’20, and Mike DeNapoli ’20. For the Mercy task, BSR’s staff was bolstered by three current Webb Students: Cross Weeks ’21, who will be joining the company post-graduation; Gabe Allen ’23; and Eric Heilshorn ’23, bringing us to a grand total of 11. Together, this unprecedented concentration of Webb talent tackled the Mercy Stability Test.

At this point, I’m hoping I’ve convinced you just how much effort went into this endeavor, but just in case you don’t believe me, I have some numbers to help make my case (in true engineer fashion). The first number is time spent. All in, the BSR team spent a combined 176 working days aboard the Mercy, which works out to more than two weeks per person. In that time, the team surveyed 842 different spaces aboard the ship. We documented everything from toilet paper to CPR dummies to spare electric motors. If it was aboard the ship we surveyed it, and in some cases, we even surveyed things that weren’t on the ship. When all was said and done, the BSR Team had surveyed 2,020,480 lbs. of weight aboard the Mercy. For comparison, that’s approximately the weight of five Boeing 747 airliners. Suffice to say that all of us were pretty exhausted by the time we got back to the hotel each evening!

Then there’s the inclining. We had to coordinate with the ship and shipyard to have huge steel weights brought aboard, have tugs available to maneuver the ship away from the pier, cranes to move the weights during the test, and a small boat in the water alongside to take draft readings. Data collection stations had to be set up. And we had to have mother nature give us a calm weather day. Somehow, after months of planning, the test was successfully completed.

But, in true Webb fashion, we made sure we weren’t too tired to have one or two socially-distanced social gatherings while we were there as well. Despite having a team that spanned almost a 10-year range in graduating classes, there’s something about the Webb family that binds us and made the experience feel like we’d all known each other for years. I’m sure I speak for the entire team when I say that it was an experience we won’t soon forget!

This article is also available on Webb News.