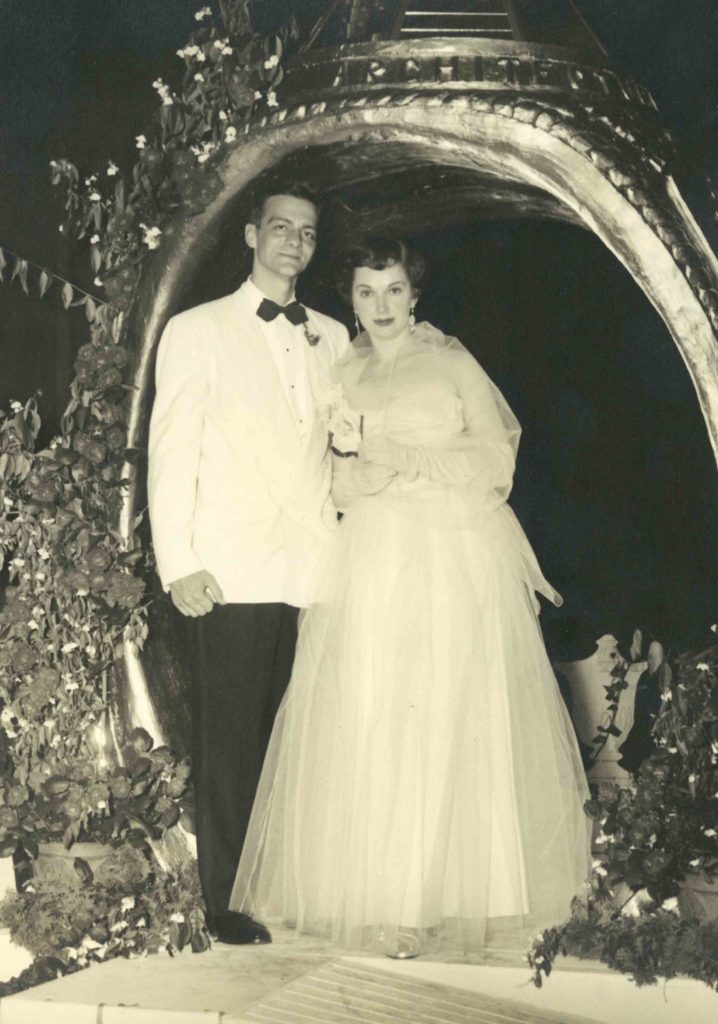 Alfred Zeien ’52 with Joyce Zeien at the Webb Ring Dance.

Alfred Michael Zeien was born on February 25, 1930, in Queens, NY. He was a quick learner. Both he and his older brother, Charlie, spoke French, and their father, being a cabinetmaker, made sure they could work with their hands. Al’s performance throughout his school years was outstanding, and as he entered his senior year of high school, he faced the same decision many of us have – which college to attend. With full-scholarship offers from Harvard and MIT in hand, he chose Webb Institute of Naval Architecture, in part, perhaps, because Charlie (Class of 1950) was already there.

In August of 1948 the Class of 1952 met for the first time, 16 young men from varied backgrounds. Since this was soon after World War II, some members of the class were veterans and therefore older, while at least one was only 16 years old. They would pick up one additional classmate during their sophomore year and would be the first class to spend all four years on the Glen Cove campus. They graduated nine.

At the time, the students were helping to convert the Pratt mansion into an institute of higher learning, so Beaver Days were long and frequent. The class developed very strong ties. Alfy, as his classmates called him, was first in his class. This was not something anyone in the class dwelled upon, and when one recruiter came to talk to the class about permanent employment, he asked the students about their class rank. No one answered and no one went to work for that company.

During their senior year, Professor Nevitt, in an effort to give the class some culture, took them into Manhattan for an evening at a nice steak house. Over drinks Al declared to Professor Nevitt that he expected to be Chairman of General Motors at 36. Professor Nevitt replied, “Really now Al, I always dreamed of settling down in a small vineyard of my own in France with a young mistress.” The class dismissed both their comments.

Al decided that upon graduation he would work for Sea Beaver, a small company in Greenwich, CT, building minesweepers for the Korean War. It was during this time that Al married Joyce Lawrence, whom he had been dating throughout his years at Webb. Together they have three accomplished children and five grandchildren, and live in their lovely home of 26 years in Woods Hole, MA.

After Sea Beaver, Al went to the Harvard Business School, graduating with his MBA in 1955. He then joined the General Dynamics Electric Boat yard in Groton, CT, where he was chief estimator and at 28, became sales manager. During this time, he was responsible for representing E.B. in negotiating all submarine contracts with Admiral Hyman Rickover in Washington, D.C. At 33, he was at General Dynamic’s Manhattan headquarters in charge of mergers and acquisitions where he learned some Wall Street lessons. He had three years left to fulfill his proclamation of becoming Chairman by the age of 36. In 1964, General Dynamics bought the Quincy Shipyard from Bethlehem Steel, and Al at 34 became the head of operations at Quincy with 8,000 employees.

In 1968 Gillette bought Braun and hired Al as its General Manager to start an international division. The Zeiens moved to Germany. Al returned to Gillette in Boston in 1973 as Group VP in the Diversified Companies operation, but in a year returned to Germany as Chairman of Braun to stem red ink there. Colman Mockler was Chairman of Gillette, and he brought Al back to Boston in 1978 as Senior VP for technical operations. Al retooled the South Boston plant, doubling output, and played a pivotal role in developing the Sensor brand of razors. In 1981 Al was elected Vice Chairman for technical operations and new business development. In 1984, he negotiated the purchase of Oral-B.

In the fall of 1986, Mr. Mockler assigned Al to head the “A” team response to a hostile takeover attempt by a corporate raider. With Al playing a key role, the team successfully fended off the takeover attempt.

In late 1987 Mr. Mockler announced a major management reorganization. Al Zeien was named Vice Chairman to head International/Diversified. This position involved the traditional businesses in the fast growing European segment and included Braun, Oral-B, and Jafra products. In late 1990, Mr. Mockler announced his intention to retire at the end of 1991, choosing Al Zeien as President/COO effective January 1, 1991. Two months later, Mr. Mockler unexpectedly died of a heart attack and on February 21, 1991, the Gillette Board declared Al Chairman and CEO.

Al took command and instilled a sense of urgency to do things faster and accelerate globalization. In 1990 66% of sales and profits came from outside the U.S. By 1996 70% of sales and 72% of profit came from outside the U.S. The proportion of total sales from Gillette products that were worldwide leaders in their markets grew from 55% in 1990 to 81% in 1996. Al insisted on an increased rate of new-product introduction and asked his senior managers to get out of Boston and move frequently around the world. He scheduled himself for one international trip per month.

Under Al, Gillette’s mission was to achieve or enhance clear leadership, worldwide, in the existing or new core consumer product categories in which Gillette chose to compete and acquired such well-known companies as Parker Pen and Duracell. During his tenure, Gillette became a member of the Fortune 500 companies. When he stepped down as Chairman in 1999, Al foresaw further growth in India, China, and Russia and sounded much like the man his classmates knew him to be.

Al has served on the boards of many companies and institutions, including the Bank of Boston, EMC, Inverness Medical Innovations, Massachusetts Mutual Life, Polaroid, Raytheon, the Boston Museum of Science, and as Chairman of the World Affairs Council of Boston.

Although his career took him away from the marine industry, Al never deserted Webb and his classmates. He and Joyce delighted in the annual reunions of the Class of ’52 where the old bonds remained strong and hosted several of them in their home. Their generosity to Webb includes the establishment of the Alfred M. Zeien Lecture Series in 2000, a program which has allowed a wide variety of talented people to share their experience with Webb students; the establishment of the Dr. and Mrs. Alfred M. Zeien ’52 Student Scholar Endowment, which subsidizes the full cost of tuition and provides a student with $2,500 toward room-and board expenses; and, a Cornerstone Gift to the current Campaign for Webb, which is projected to address infrastructure improvements. For its part, Webb has recognized Al’s beneficence and outstanding career with the award of an Honorary Doctor of Science degree in 1997. The Alumni Association also honored Al with the William Selkirk Owen award in 2013. This award is the Alumni Association’s highest honor and is presented to a graduate in recognition of outstanding achievement and service to the profession and his/her Alma Mater each year.

Al feels that his time at Webb was the most fruitful of his life, establishing lifelong friendships, instilling a strong work ethic, and providing an outstanding education.

He is dedicated to Webb’s continuing to provide the same opportunity to deserving students for years to come. He once told Webb President Keith Michel: “My Harvard degree was important to my career, but it was Webb that made me the person I became.”

Al Zeien is a man of intelligence, dedication to principle, and integrity. Some career. Some life. Some man.