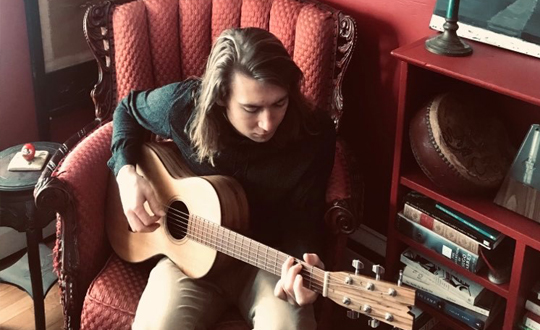 When I came to Webb in the fall of 2017, I knew I would love my major and meet some great friends. I did not know that, in addition, I would find the time to record and produce my first musical album titled Take N One.

The story of the album begins before Webb, in my home state of Rhode Island. I started writing music in high school and formed a band with two friends. They were able to help me write supplemental parts to the songs I had already written for me and my guitar. Together we learned how to use proper equipment to record and produce music entirely by ourselves.

When I got to Webb, I thought I would have to put music on the back burner for a while. There is no doubt it was always second to academics, but it was not until recently when I looked back on my time at Webb that I realized how few sacrifices I was forced to make. Webb offered me convenient, yet formal, musical outlets with groups like the WooFS (Webb Family Singers) and the Webb jazz band. For our humanities elective, some of my classmates and I chose to take a music composition elective.  It was in this course where I composed a “Study in Em,” the opening track to my album. In the fall of my sophomore year, I went abroad to the University of Southampton. While in England, I audited a class in songwriting and joined several music clubs to become a more polished guitar player. While doing my sea term aboard the M/V Yorktown Express, I recorded the ominous sound of crashing waves on the ship. This would be another track on my album.

Out of all of the places Webb has taken me to, the most important musical space for me has been the Webb auditorium. The auditorium is where I spend time writing music and reflecting on days both difficult and joyous. Webb has become embedded in my life and consequently in my music as well. In the fall of 2020, I managed to find a few spare minutes to set up equipment and focus on finishing recording some tunes. What ensued is a modest album that I am very proud of.

Listen to the album here: