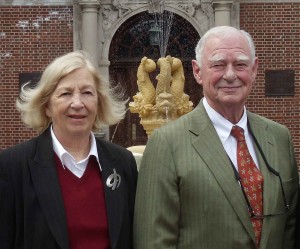 H. F. “Gerry” Lenfest grew up knowing the value of hard work. His father grew up in Brooklyn but always wanted a farm. When Gerry was 13, his father bought a farm in a remote area in Hunterdon County, New Jersey. This was a real working farm, so Gerry spent much of his time slopping hogs, milking cows, and tending chickens. When he was 17, his father sent him to Iowa to be a farmhand, and at one point Gerry hitchhiked to North Dakota to be a roughneck in an oil field. When he was 19 years old, his father asked him what he wanted to major in in college. When Gerry said he didn’t know, his father said, “Well then, if you don’t know, I won’t send you,” so Gerry went to sea on a T-2 tanker. When he returned in October of 1949, Gerry’s father informed him that he had changed his mind and had enrolled him at Washington and Lee University. Although the semester had already started, he enrolled. After graduation, he served in the U.S. Navy, then completed law school at Columbia University. After working on Wall Street, he went to work for Walter Annenberg’s Triangle Publications in Philadelphia, where he bought a 2800-square-foot house in 1966 for $35,000. When Triangle decided to sell its cable business, Gerry scraped enough money together to buy a system with 7,600 subscribers. He grew the business, concentrating on the markets around Philadelphia and San Francisco. When he sold it to COMCAST in 1999, it had 1.3 million customers and was the twelfth largest cable television company in the U.S.

After the sale, Gerry and his wife, Marguerite, decided upon two basic principles: first, that their children would be provided for, and second, they would not die wealthy. They do not believe in the concept of keeping wealth in “perpetuity,” but rather that money should be used to improve the environment and the lives of others in their lifetime. They, personally, and the foundation they established have donated more than $1.2 billion to various charities and causes. The foundation will dissolve no later than ten years after their deaths. Their children have also created foundations focusing on their particular interests.

Gerry and Marguerite have supported education, art, music, museums, and the environment. They have established the Lenfest Ocean Program. They have given generously to save the SS United States, to the Williamson Free School of Mechanical Trades, and have committed more than $50 million to establishing the Museum of the American Revolution that is under construction in the historic district of Philadelphia. Of all their endeavors, Gerry is perhaps proudest of the Lenfest College Scholarship Program, their first real philanthropic venture. The program provides 24 scholarships a year to deserving rural students and to date has supported over 300 students.

At one point Gerry and Marguerite considered building a new, larger house. Says Gerry, “We bought the last of the King Ranch property in Chester County, Pennsylvania. The huge King Ranch had 800,000 or so acres in Texas, and it had about 10,000 acres in the Philadelphia area. The head of King Ranch passed away, and they sold their property in pieces. I was fortunate to buy the last 500 acres. I had the design of this house, and I went out to see it. The hole was dug and rebar was being put in. I looked down in this hole and asked the architect, ‘How big is that house?’ and he said: ‘16,000 square feet.’ I thought for a moment, and I said, ‘You know what, fill up the hole.’ It was the most expensive hole in Chester County.” Their property was next to 500 acres that was bought by the county. The Lenfests also bought an adjoining 260- acre farm and combined the properties into a nature preserve called ChesLen. Gerry says, “So there are approximately 1,200 acres without a house on it to preserve some beautiful rolling hills. People can go on walks with their dogs or ride their horses in a beautiful setting.”

Gerry’s father, Harold C. Lenfest, graduated from Webb in 1918 with a class of 17, the largest to that time, due in part to the needs of World War I. After graduation he joined the Army Transportation Service with the rank of Commander. When he asked why someone as young as he should be given such a title, he was told, “In Washington people won’t listen to you if you don’t have a high position.” Says Gerry, “My father regarded himself as a ‘Webb man.’” He was immensely proud of his time there and felt it was the best part of his education. He established many friendships from his time at Webb and felt great loyalty to the school.”

Gerry and his wife visited Webb for the first time after his father’s death and met with then President Ron Kiss. They also met with the students and were very impressed with them and with Webb’s commitment to evolving with changing technology. To honor his father, they donated the funds needed to refurbish the main hall, now named the Harold C. Lenfest Gallery.

Gerry now serves as an honorary member of Webb’s Campaign Cabinet and has made a Cornerstone level commitment to the Campaign.
“Alumni and friends of Webb should consider the Campaign a call to arms—to enhance the endowment and provide the funds needed to assure future students an education without the burden of tuition.” That is a message we all need to take to heart.

Gerry and Marguerite still live in the house they bought in 1966.