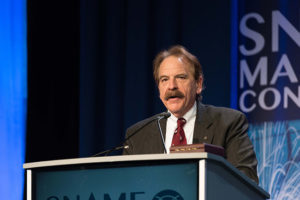 The David W. Taylor Medal is the highest award SNAME confers. The award is named after the man who built the first experimental towing tank in the United States, recognizes contributions to the development of future maritime systems through the creation of technology based on research. Professor Daidola was selected for this year’s medal for his notable achievements in naval architecture and marine engineering.

In addition to receiving the David W. Taylor Medal, Professor Daidola presented a paper at the convention on pontoon boat instability in waves. In his paper, Dr. Daidola investigates the stability of pontoon boats running in waves utilizing a quasi-static analysis considering the conditions for stable equilibrium and the limits where instability can be expected.

Dr. John C. Daidola, P.E. is a graduate of University of Michigan and Stevens Institute in naval architecture and marine engineering. He has authored over 80 publications on a variety of subjects of interest to the industry. Dr. Daidola is a licensed engineer, currently registered in eight states. He has been employed by Newport News Shipbuilding, the naval architecture and marine engineering firms of M. Rosenblatt & Sons, Inc., and successors as well as John J. McMullen Associates, and as an Adjunct Professor at Stevens Institute and U.S. Merchant Marine Academy.

Currently, Dr. Daidola is an Assistant Professor of Structural Engineering at Webb Institute and the President of his own naval architecture and marine engineering firm, AENY. He is a Fellow of SNAME and has been active in the organization, including as its first Vice President Technical.