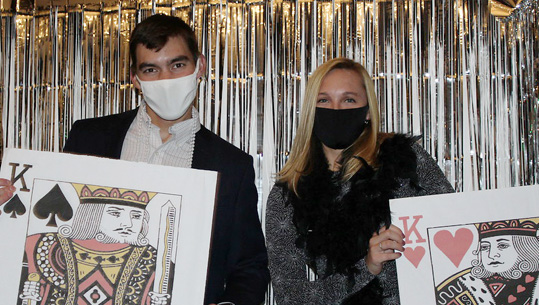 The 2020 Webb Institute Casino Night was filled with big winners and high rollers. Despite the restrictions in place due to COVID-19, the Student Social Committee (SOCO) was able to once again turn Stevenson Taylor Hall into a roaring casino, filled with plenty of games. Many students made thousands off their original 500 Webb bucks, a currency inspired by our wonderful faculty members, in games such as blackjack, poker, horse racing, roulette, and Plinko.

The evening made its way outside to the Webb tennis courts where the annual three-person horse race took place. Each class put forth a team to hopefully take home first place. With all bettings closed, the horse race began. Immediately out of the gate, the sophomore class took the lead, followed shortly by the juniors and seniors with the freshmen bringing up the rear. Each team but the sophomores had troubles keeping their horses intact, allowing for the sophomores to keep up their lead. They ended up blowing away the competition with the seniors coming in a distant second and the freshmen not far behind them. The juniors stumbled across the finish line well after the other teams had finished.

The next event was run by the seniors, where they attached a spring and handle to an oil drum to create a makeshift mechanical bull. Many tried and  were flung away by the bucking oil drum. Luke Sullivan ‘23 used a unique tactic of holding on to the rear of the “bull” to secure the longest time.

The next event of the night was the arm-wrestling competition. Many competitors lined up to show off their physical prowess and prove their might in the tournament. David Ockers ‘22 secured the title of Webb arm-wrestling champion in a stunning display of strength.

Overall, casino night was a great success. Many students were able to win big and spend their winnings on the silent auction held throughout the night which would not have been possible without SOCO.