Dr. Alfred Zeien endowed the Zeien Lecture Series in 2000 with the goal of broadening student life by bringing to Webb speakers on a wide variety of topics.  Webb trustee Chris Wiernicki will present the 21st Zeien lecture on May 18th in the Henry Auditorium at Webb Institute. 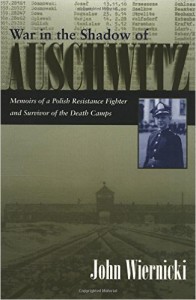 Chris’ father, John Wiernicki, a Polish resistance fighter captured by the Nazis, was incarcerated in the Auschwitz concentration camp and later Buchenwald.  While on a forced march to yet another camp during the latter days of the war, he escaped and was rescued by the advancing American troops.  He later documented his experiences through a series of watercolor paintings and in a personal narrative, “Shadow of Auschwitz, Memoirs of a Polish Resistance Fighter and Survivor of Death Camps”. This book is available on Amazon.

At this Zeien Lecture, Chris will present some of his father’s watercolors and give personal insights into this extraordinary story.

Check back for more information as it becomes available.

Additional information about the Zeien Lecture Series is available online.