Webb Institute is one of the nation’s best colleges for students seeking a great education with excellent career preparation and at a relatively affordable price, according to The Princeton Review®.

The education services company named Webb Institute as one of its Best Value Colleges for 2022 on April 26. The full list of The Princeton Review’s Best Value Colleges for 2022 and the project’s seven categories of ranking lists, as well as the company’s profiles of the schools, is accessible for free with registration at https://www.princetonreview.com/college-rankings/best-value-colleges/.

The Princeton Review chose 209 schools for the 2022 list based on data from its surveys of administrators at more than 650 colleges in 2021-22. Topics covered everything from academics, cost, and financial aid to graduation rates, student debt.

In all, The Princeton Review crunched more than 40 data points to tally ROI (Return on Investment) ratings of the colleges that were the bases for the Best Value Colleges school selections.

“The schools we chose as our Best Value Colleges for 2022 are a select group: they comprise only about 7% of the nation’s four-year undergraduate institutions,” said Rob Franek, editor-in-chief of The Princeton Review. “We commend their administrators, faculties, staff, and alumni for all they are doing to educate their students and guide them to success in their careers. These colleges are also exceptional for the generous amount of financial aid they award to students with need and/or for their comparatively low cost of attendance.”

The Princeton Review does not rank the Best Value Colleges hierarchically on a single list, from 1 to 209.

The Princeton Review is also known for its other college rankings in dozens of categories, many of which are reported in its annual book, The Best Colleges, published in August.

Other Princeton Review rankings and lists that Webb Institute is on:

Founded in 1889 by New York-based shipbuilder William H. Webb, Webb Institute is a top-ranked undergraduate institution specializing in Naval Architecture and Marine Engineering. Webb is the only full-tuition scholarship, private undergraduate engineering program of its kind in the United States. Webb Institute’s beautiful, waterfront campus is located in Glen Cove, NY, on the North Shore of Long Island.

The Princeton Review® is a leading tutoring, test prep, and college admissions services company. Every year, it helps millions of college- and graduate school–bound students achieve their education and career goals through its: online and in-person courses delivered by a network of more than 4,000 teachers and tutors; online resources; more than 150 print and digital books published by Penguin Random House; and dozens of categories of school rankings. Founded in 1981, The Princeton Review is now in its 41st year. The company’s Tutor.com brand, now in its 21st year, is one of the largest online tutoring services in the U.S. It comprises a community of thousands of tutors who have delivered more than 21 million one-to-one tutoring sessions. The Princeton Review is headquartered in New York, NY. The Princeton Review is not affiliated with Princeton University. For more information, visit PrincetonReview.com and the company’s Media Center. Follow the company on Twitter (@ThePrincetonRev) and Instagram (@theprincetonreview).

Webb Institute is ranked in The Princeton Review’s latest edition of its college guide, The Best 384 Colleges, including being named #15 Best Career Services.

Webb was also received honors in the following ranking lists:

#5 Students Study the Most

#20 Their Students Love These Colleges

Webb also received high marks in other areas, including 96 in Academics and 96 in Quality of Life according to The Princeton Review survey that asked students to rate their schools on dozens of topics and report their experiences.

A student surveyed for the guide boasted about Webb’s career services and premier internship program, “Work terms give each student a  feel  for  industry  sectors  and  allow  them  to  make  improved  career  decisions  when  selecting  a  first  job – You’ll learn something in the classroom  and  then  see  it  in  action.”

One student said, “Professors are brilliant and since they all have practical work experience they are able to make our education applicable to what we’ll be doing once we graduate.”

One of The Princeton Review’s most popular guides, The Best 384 Colleges rankings are based on surveys of 138,000 students at 384 top colleges that includes a wide representation by region, size, selectivity, and character. Published annually since 1992, the book includes detailed profiles of the colleges with rating scores in 8 categories as well as ranking lists of top 20 schools in 62 categories.

For more information on the rankings  and  methodology  visit  www.princetonreview.com/college-rankings/how-it-works 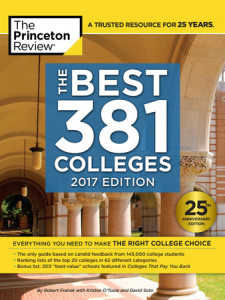 Webb Institute is one of the nation’s best institutions for undergraduate education, according to The Princeton Review. The education services company features the school in the new 2017 edition of its flagship college guide, “The Best 381 Colleges” (Penguin Random House / Princeton Review, $23.99, August 30, 2016).

Only about 15% of America’s 2,500 four-year colleges are profiled in the book, which is one of The Princeton Review’s most popular guides. Published annually since 1992, it includes detailed profiles of the colleges with rating scores for all schools in eight categories, plus ranking lists of top 20 schools in the book in 62 categories based on The Princeton Review’s surveys of students attending the colleges.

“Webb Institute’s outstanding academics are the chief reason we chose it for this book and we strongly recommend it to applicants,” says Robert Franek, Princeton Review’s Senior VP-Publisher and author of “The Best 381 Colleges”. “We make our selections primarily based on data we collect through our annual surveys of administrators at several hundred four-year colleges. Additionally, we give considerable weight to observations from our school visits, opinions of our staff and our 24-member National College Counselor Advisory Board, and an unparalleled amount of feedback we get from our surveys of students attending these schools. We also keep a wide representation of colleges in the book by region, size, selectivity and character.”

President R. Keith Michel comments, “We are pleased that the Princeton Review has again acknowledged Webb’s commitment to excellence in education, by selecting Webb as one of its 381 Best Colleges.”

In its profile on Webb Institute, The Princeton Review praises it for its “admissions committee, who are dedicated to finding students who will excel in the school’s rigorous program” and quotes extensively from Webb Institute students the company surveyed for the book. Among their comments: “the winter work terms give each student a feel for industry sectors and allow them to make improved career decisions when selecting and first job”, “You’ll learn something in the classroom and then see it in action”, and that students “become best friends very quickly, giving everyone great support systems both academically and socially.”

The Princeton Review does not rank the colleges from 1 to 381 in any category. Instead it uses students’ ratings of their schools to compile 62 ranking lists of top 20 colleges in the book in various categories. The lists in this edition are entirely based on The Princeton Review’s survey of 143,000 students (about 375 per campus on average) attending the colleges. The 80-question survey asks students to rate their schools on several topics and report on their campus experiences at them. Topics range from their assessments of their professors as teachers to opinions about their school’s library, career services, and student body’s political leanings. The Princeton Review explains the basis for each ranking list at http://www.princetonreview.com/college-rankings/ranking-methodology.

The schools in “The Best 381 Colleges” also have rating scores in eight categories that The Princeton Review tallies based on institutional data it collected during the 2015-16 academic year and/or its student survey for the book. The ratings are scores on a scale of 60 to 99 and they appear in each school profile. Rating categories include: Academics (98), Admissions Selectivity (97), and Fire Safety (98), a measure of school’s commitment to the sustainability and the environment in its policies, practices and education programs. The Princeton Review explains the basis for each rating score in the book and at http://www.princetonreview.com/college-rankings/college-ratings

Webb Institute is on the following ranking lists in “The Best 381 Colleges”:

#12 Students Study the Most

In a “Survey Says” sidebar in the book’s profile on Webb Institute, The Princeton Review lists topics that Webb Institute students surveyed for the book were in most agreement about in their answers to survey questions. The list includes: “students are happy”, “classroom facilities are great,” and “internships are widely available.”